An exciting new musical is about to make its world premiere at the Ahmason Theatre! From the creator of “M. Butterfly,” and the wildly successful “Chinglish,” the Tony Award-winning David Henry Hwang is back with the brand new musical “Soft Power!” A collaborative effort with the composer of Fun House, the phenomenal Jeanine Tesori, Soft Power follows on from “Chinglish,” as a dark comedic examination of Chinese culture under the Western eye. Laugh-out loud hilarious and deeply thought-provoking, Soft Power is a must-see for any fan of musical theatre! Book your tickets early to catch this new musical in its Summer premiere at the Ahmason Theatre!

Named after the concept developed by Josef Nye, describing the power of persuasion and attraction over force or bribery, Soft Power begins as a contemporary play, which then shifts into a musical set 150 years into the future. At a time with Chinese and American conflict at its peak, Soft Power relieves the tension by taking a cheerfully bleak look at the prospect of the former’s rise to world domination. In doing so, the musical highlights man of the simplifications and stereotypes of Asian people when viewed from an American perspective, and does so in a hilariously tongue-in-cheek manner. Fans of Chinglish will adore Soft Power’s black comedy. A darkly strange and delightfully comic new experience, Soft Power is this year’s must-see musical!! 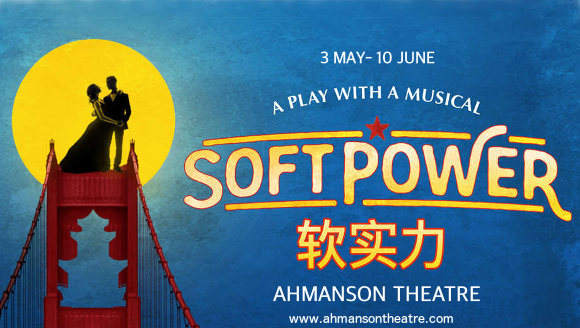